Swimage will integrate with either SCCM or Ivanti in order to provide some of the heavy-lifting included in distributing the image, drivers and applications to the PC during the deployment through its distribution points. It’s also uses the ESD for collecting current PC inventory information as well as for scheduling and initializing the zero-touch deployment. This integration is optional as Swimage will work complexly stand-alone as well.

The primary goal of Swimage (a true zero-touch solution) is to fully automate, simplify, and manage the entire deployment process with very high reliability, including workflow and EU communications. With the right technology like Swimage, combined with the planning and process, complete PC Lifecycle management is easily brought under your control.

The following Swimage process flow shows which manual steps are involved and where Swimage picks up the automation. Notice that the vast majority of the manual processes are in the initial planning and setup phase; once completed, Swimage and your ESD (e.g., SCCM) invisibly in the background, handle the rest of the automation. The deployment section in the illustration shows complete zero-touch deployments. 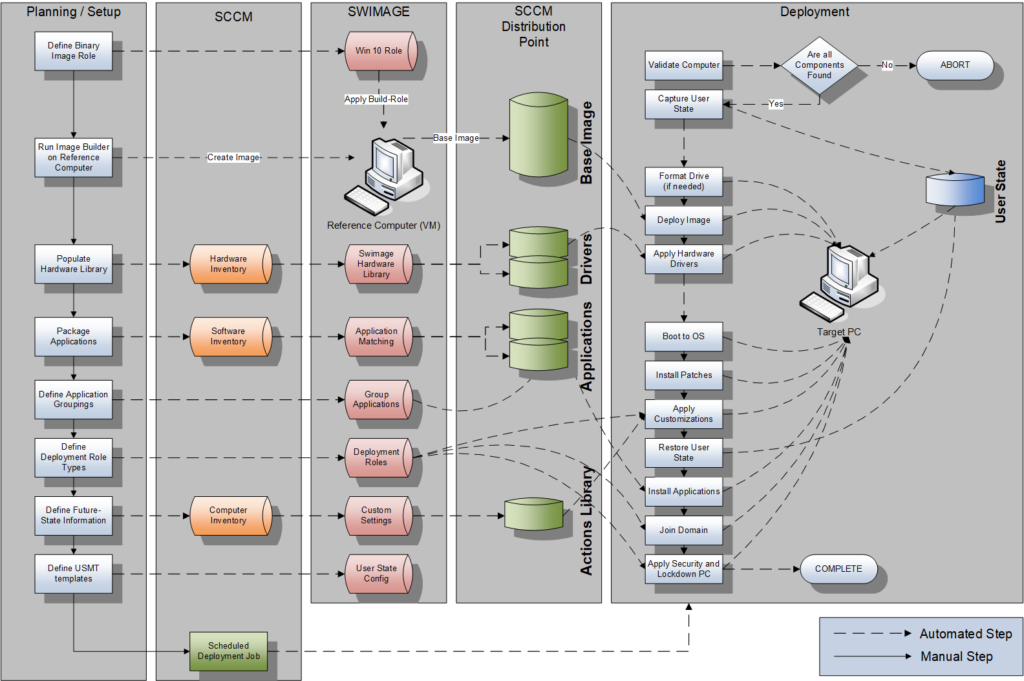 The problems facing technologists in the arena of imaging are not new. The same issues that IT departments faced trying to roll out small pockets of Windows 3.1 are the same issues that they face trying to roll out Windows 7 or 10. Swimage is designed to render these issues obsolete. Developing a method by which IT can maintain the flexibility of a customized solution for “personal computers” while allowing cost reduction through componentization and automation has vexed the industry for decades.

An initial approach to this problem was imaging. The idea of taking a snapshot of a machine and then being able to rapidly replicate that snapshot caught on like wildfire. Difficulties with security and customization emerged as IT groups across the world started trying to force the “square pegs” that represented their customers into the “round holes” that represented their one–size-fits-all solution. The problems that became apparent rapidly were:

As a premier consulting firm, LogicDS was engaged to provide deployment assistance for companies throughout the world. The goals of those organizations were to advance deployment rapidly and on budget. To this end, LogicDS developed a set of processes around a dynamically layered imaging process that has come to be known as Swimage. This methodology, codified, became the first release of the framework solution.

The core concept of Swimage is that of dynamic layering. The principle is to have a framework that can be leveraged to specify “what” should be included in an image definition rather than focusing on the “how” to build that image. The system can then, once provided with the configuration metadata, create any core image that is specified and manage that image through multiple versions or iterations.

Once the core, thin image is created, it is associated to the Operating System from which it was derived and cataloged. That single image can be used to deploy that specific Operating System on any resource in the environment as the core image has no specific hardware drivers or other characteristics that would render it non-transferable to another machine. All of the configuration data that would make a particular instance of an image unique is stored in a data-focused layer called a template. Templates can then be combined to create very unique customizations. Templates are roughly analogous to group policy objects. They are discussed in greater detail elsewhere in the documentation.

Most organizations have different needs and reasons for deploying an OS including:

Swimage handles all of these reasons for deployment via its intuitive and flexible system.