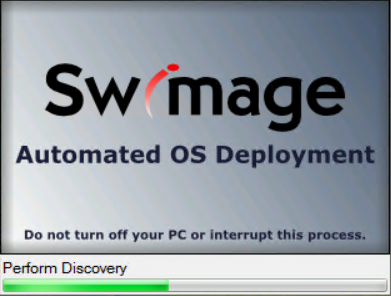 The Swimage Conductor is the program responsible for handling all steps required to perform the deployment on a PC.

The Conductor follows a prescribed set of instructions, as determined by the activity to perform, and will monitor each step to ensure the overall success of the deployment.

The instructions that the Conductor utilizes to perform its needed tasks, called the “Conductor Action Set”, vary based on the activity at hand.   These task include, but are not limited to :

Once the Swimage Conductor begins, it will actively manages the PC until the job is completed.   It handles all configurations, installs, reboots, web calls, and reporting.   If an error occurs during the migration or the PC is powered off, the Conductor will automatically determine that last successful step and continue from there.   It will also retry any failed steps until it succeeds or until the failed list timeout is  reached.