The Future State defines how a PC is to be imaged, what OS is installed, what settings are applied, what applications are installed, and how data is to be migrated.  Generally speaking, it defines everything about the “Future State” of the PC.

A Future State is created in two ways.

When importing through the Computer Importer, the Future State is immediately generated.

When creating a Deployment Job, the Future State does not get created until the scheduled deployment time is reached.

The Future State as well as all roles and templates include 8 tabs for the configuration of the entire system.

In most cases, this would be the only screen needing input. The only two required fields show up here, “Computer Name” and “Computer Role.” All other fields should have all the setting filled in for a successful deployment.
Available templates show up here on the left hand side. Any templates can be added at this time and the settings will change automatically.
Additionally, and settings can be changed manually on any of the tabs in order to override any of the settings assigned by the role or the templates. 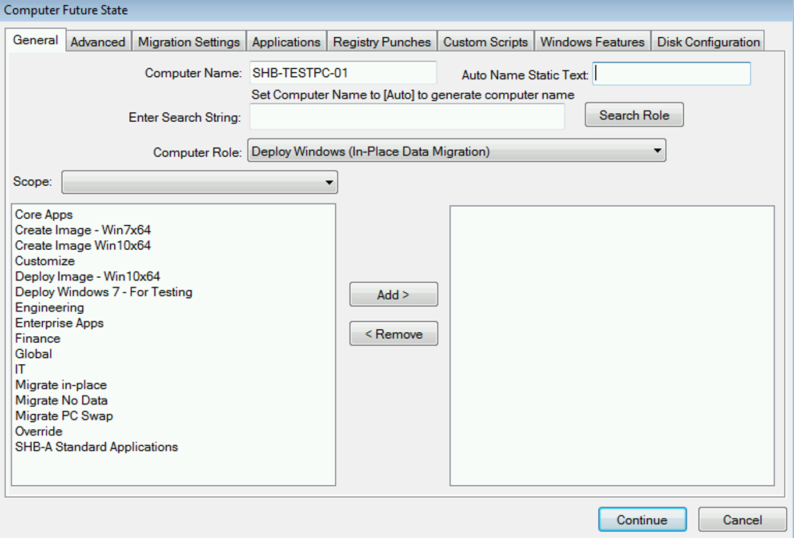 The Advanced tab contains OS, Image, Domain, and other settings. The User ID field is optional, but can be used for tasks such as PC auto naming, assigning to local groups, or sending out e-mail communications. 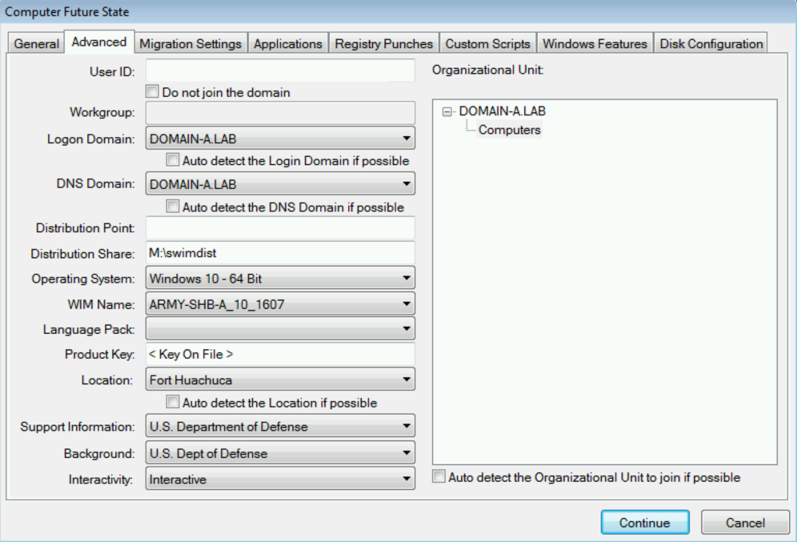 The Migration Settings tab is where the data migration settings are defined. The data migration settings drop-down list the methods and settings for the USMT. The source USMT Computer is used for a “Computer Swap” scenario. This would be the PC that’s being migrated from. It assumes the old PC has already run the State Capture job and the data is waiting for the new PC to restore it. This is not used for the “Direct Data Transfer” process using a Swimage kit. In the DDT case, this field is left blank. 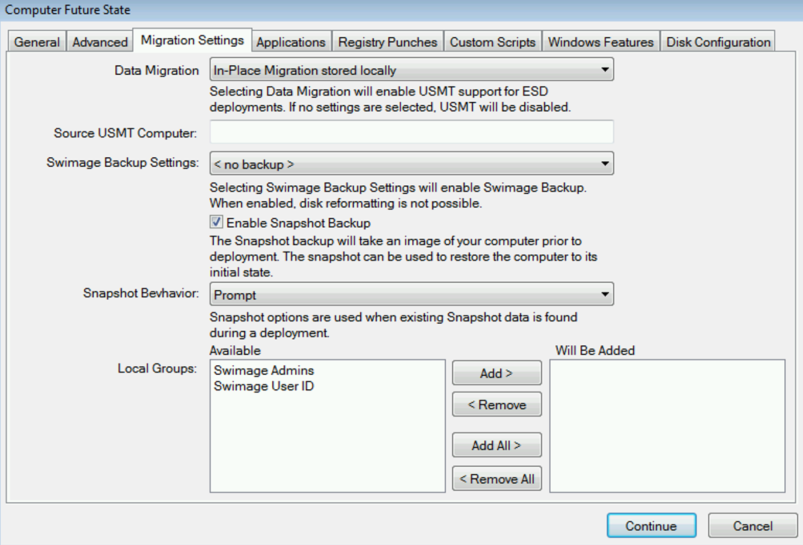 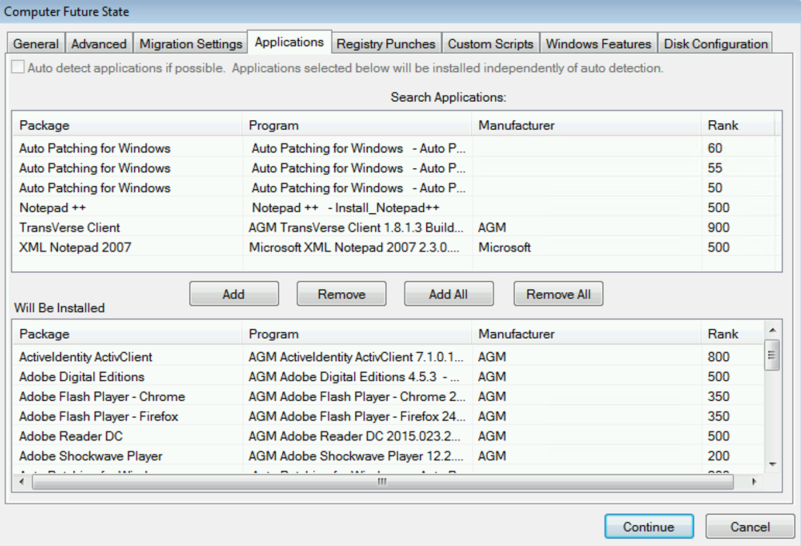 The Registry Punches tab shows which registry tweaks have been assigned to be added to the deployment. 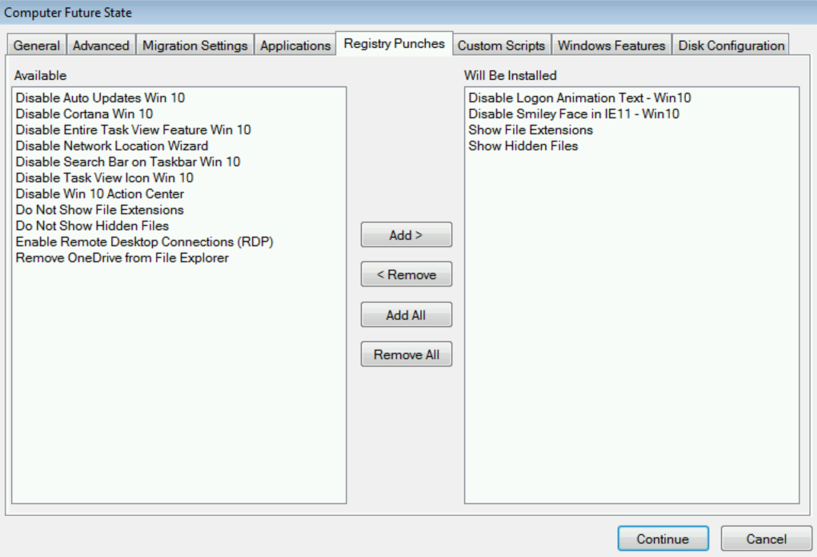 The Custom Scripts tab shows which scripts have been assigned to be executed during the customization phase of the deployment. 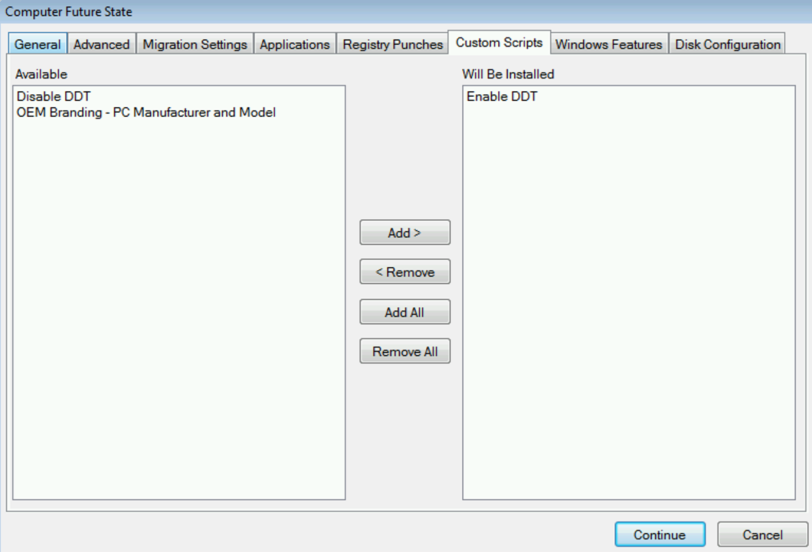 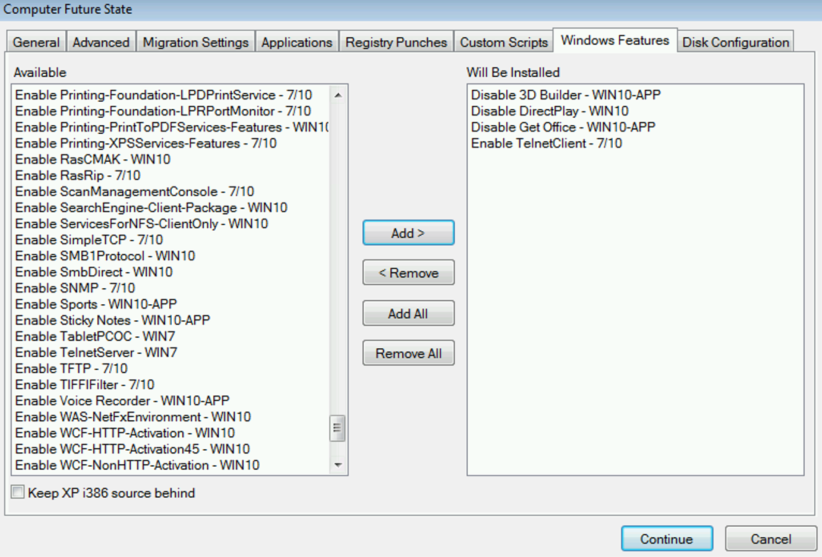 The Disk Configuration tab defines how the disk will be treated during the deployment.

A Single Partition is the normal and recommended configuration for the disk. Even if Single Partition is selected, if the PC is configured to use UEFI, Swimage will automatically create the EFI and reserved partitions in addition to the Single OS partition. The default behavior is to keep the existing partition in-tact unless there is a requirement to repartition the drive. The check to “Force a repartition of the disk” will override the default behavior and repartition. Be aware that this may conflict with the data migration settings. If data migration is set to store locally and/or it’s set for Snapshot, checking the “Force repartition” could make you lose data. If you have conflicting settings such as this, Swimage will pop up a warning before it repartitions the drive. 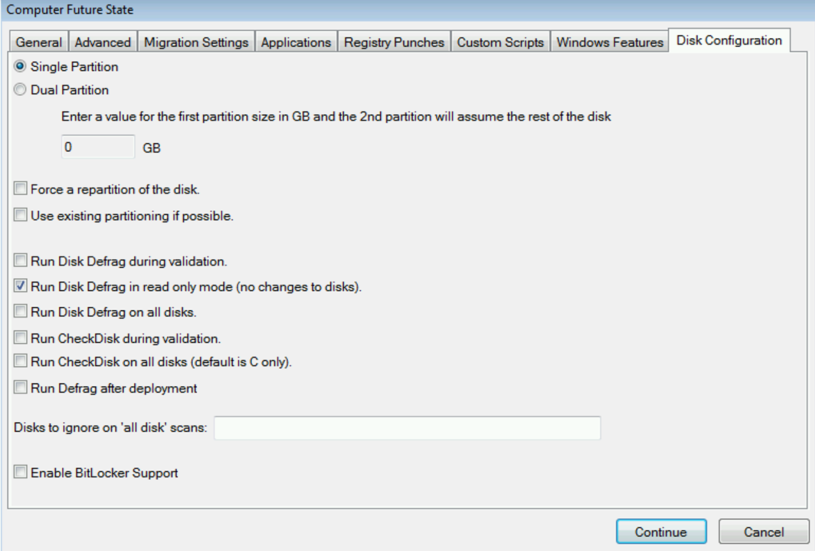