Although from a traditional point of view, an image would be considered what gets deployed when you “image” a PC. However, in the Swimage world, it’s merely a part of the entire process and is a technique used to accelerate the deployment act by preconfiguring the standard parts in what we call an “image”. Yes, Swimage still uses the standard imaging formats and processes such as the WIM format, etc. However, the image (or WIM) is created by Swimage from the predefined set of deployment parts such as a role or series of templates reducing both time and effort.

The image itself can contain as many or as few applications as desired. This decision is really based on what you want to trade off, speed versus flexibility. For example, application that have a long install and are installed on every PC, like Office, can be included in the image to save time. Also, in some cases both a “thick” and a “thin” image are produced to give both an option. When migrating a of PCs in a short period of time where time is essential, a “thick” image may make sense.

With Swimage, as images are easily produced and are completely consistent, having multiple images that serve different purposes is not difficult to maintain. 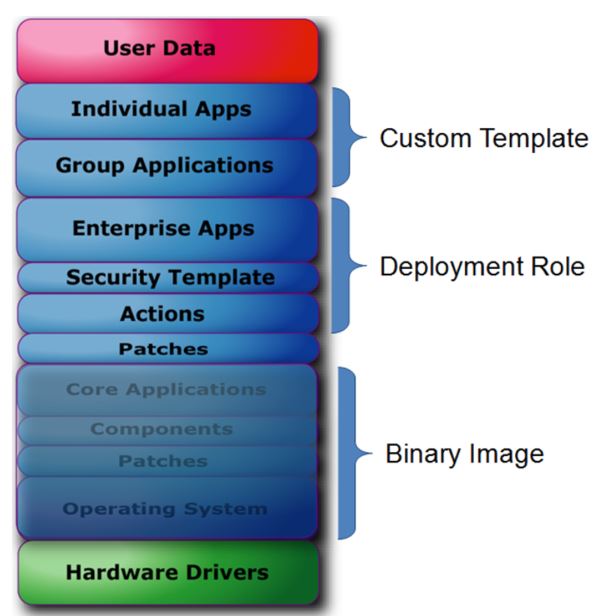 Swimage not only manages the deployment parts in a set of catalogs and libraries, but it plays an essential role in the assembly of the parts. By utilizing a dynamic and intelligent deployment assembly engine like Swimage, every PC deployed in your environment can be uniquely configured, yet comply with all corporate standards. Swimage in essence has abolished the previous notion and dichotomy that you must choose between a standard environment and flexibility. Swimage allows you to have both standards and flexibility through the intelligent design of templates and roles, which can be assembled in any fashion to achieve the desired results for each device being deployed.